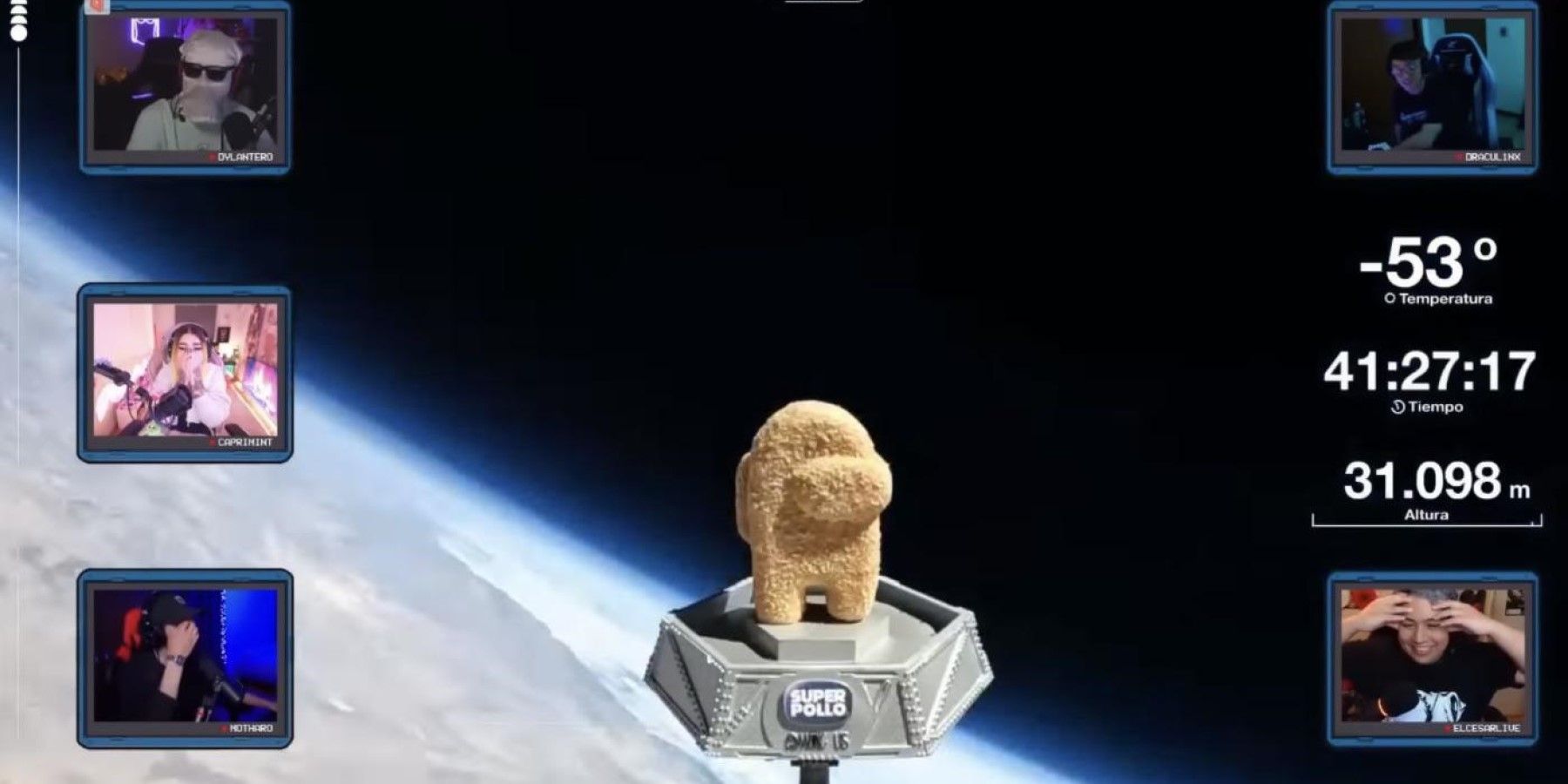 Among Us teamed up with a Chilean meat producer Super Pollo to send a chicken nugget shaped like a crewmate into outer space. The hilarious feat was shared by a group of popular Latino Among Us streamers.

Super Pollo is one of the largest meat company brands in Chile, and it is responsible for over half of the country’s national market chicken sales. It teamed up with InnerSloth to design a chicken nugget in the shape of a crewmate–one of the playable, nugget-like astronauts in Among Us.

RELATED: Among Us Rolls Out New Update

The clip was captured by Dylantero, a Chilean streamer with nearly a million followers, and fellow Hispanic influencers Caprimint, Dracul1nx, Motharo, and ElCesar. The stream started with the players playing a game of Among Us as they waited for the balloon launch. About nine minutes into the video, they switch over to the live footage of the Super Pollo Among Us collaboration. The suspicious-looking nugget is attached to an atmospheric balloon and camera as it ascends for over five minutes. At just over 32 miles above sea level–14 minutes into the video–the balloon pops, sending the nugget plummeting back down to the earth’s surface.

Technically speaking, the nugget never reached outer space. The Karman Line, an imaginary boundary that marks the place where conventional aircraft can’t fly above, is about 62 miles above sea level. This means the Among Us nugget only made it about halfway to outer space proper. If it wanted to orbit as high as the International Space Station, it would have needed to travel up another 220 miles above sea level.

Nevertheless, Among Us fans couldn’t help but appreciate such a ridiculous and hilarious premise. The video itself garnered almost 200,000 views over just a few days and got international coverage and comments across several social media platforms. The puns flowed freely–some of the best included the title “Anug us” and the Spanish language pun of “A Pollo 13.” Some fans also complimented Super Pollo on the sheer accuracy of the Among Us nugget, to which DWSRowan, InnerSloth’s merch license manager, commented:

Thank you!! Super Pollo worked hard to make sure that the shape worked with us and the Among Us team and we’re really happy with these funky little dudes.

Among Us has been an unexpected cultural phenomenon in the gaming universe. Its initial release was lukewarm at best due to poor marketing and timing. The game’s population snowballed nearly two years after Among Us launched, going from failed indie game to international party game staple. It sparked a revitalization of Mafia– and Werewolf-style games, such as First Class Trouble. Few can say Among Us’ impact on gaming is anything less than out of this world.

Among Us is available on PC, PS4, PS5, Switch, Xbox One, Xbox Series X/S, and mobile devices.

MORE: 10 Free-To-Play Games That Bombed At Launch But Eventually Found An Audience